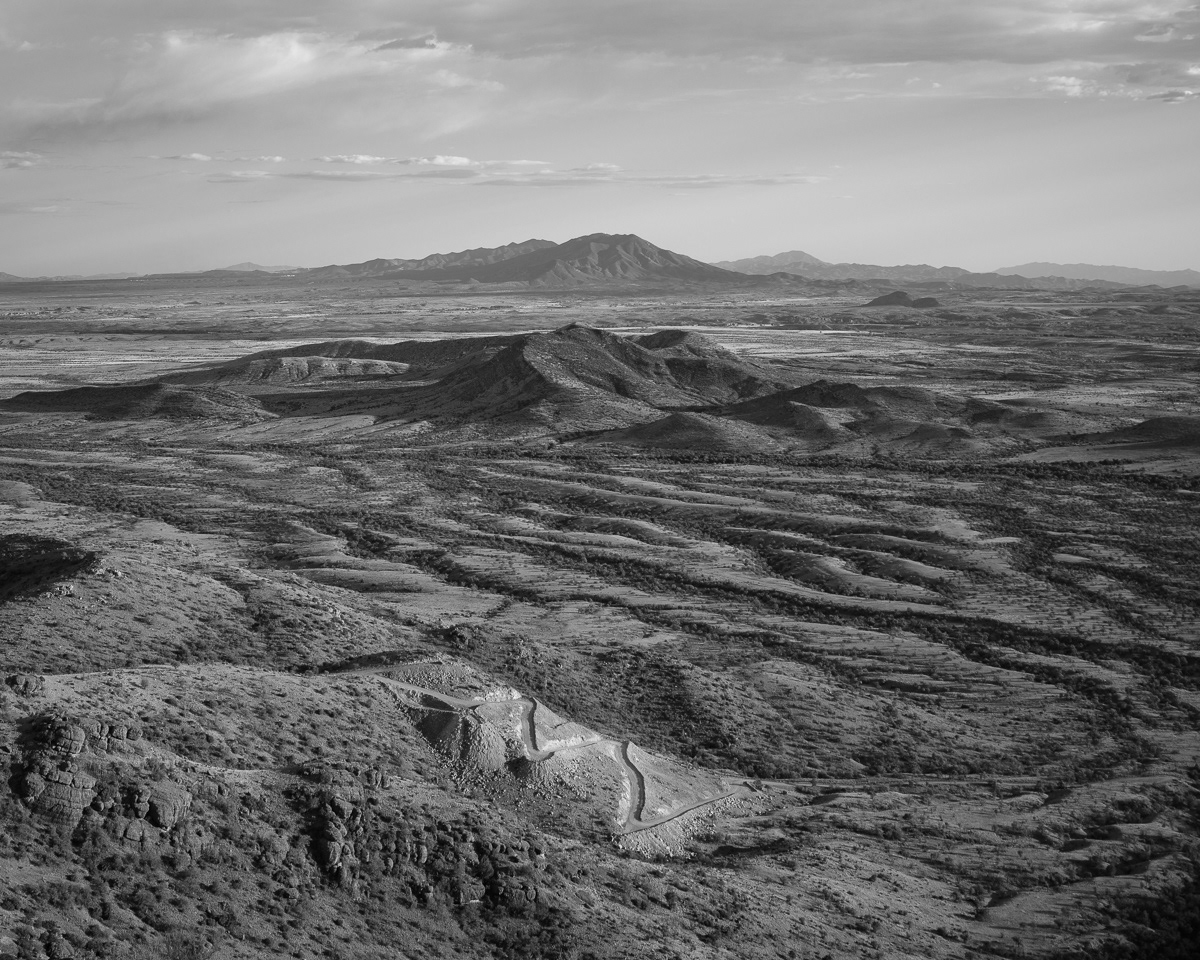 New Landscapes on the Southern Border
In 1854, six years after the conclusion of the Mexican-American War, the U.S. bought a large swath of land from a beaten and bankrupt Mexico for $10 million. The so-called Gadsden Purchase pushed the U.S. border in New Mexico and Arizona deeper into Mexican territory. It was and still is rough and beautiful country. Much of the region is what geologists call “basin and range;” great expanses of desert that rise abruptly into mountain ranges that then descend sharply into the next basin like heartbeats across an EKG. But it’s the border itself that defines and animates the landscape.
First marked by simple obelisks the border was, in practical terms, open. People moved back and forth with little interference and little impact on the land. In recent decades, deepening poverty and instability have increased the movement of people across the border south to north consequently sharpening political and cultural bias in the U.S.. The U.S. has responded with an escalating series of barriers on the border and the creation of what is now the second largest policing force in the country; each phase of enhanced security demonstrably less kind to the landscape.
Hidden in the border landscape are footpaths left by generations of immigrants; empty water bottles and debris, the vestiges of the silent drama of people risking their lives to find something better in the North. While coyotes and Border Patrol agents hustle up and down the line playing their parts, people wait their chance to come across, fence or no fence, pawns in a rigged game of economic disparity. As that disparity has grown so too has the height and ferocity of the border fence.
The recent surge of fence building has been disruptive to the landscape to a degree that can’t be fully realized from images in news reports. Its construction has left in its wake drained aquifers and blasted mountaintops and has traded pristine desert for thousands of acres of service roads and fencing. The height of a three-story building, the scale of the new fence is confounding, intimidating. Dark iron and concrete, strung with razor wire, its presence in the landscape resonates with a medieval brutality.
Seen from above the lines of road and fence are emphatic; a bullet straight line of fence connecting two mountain ranges, a serpentine stretch of road, a notched mountaintop opening to the sky. These marks on the land reaching across hundreds of miles are perhaps reminiscent of geoglyphs, the enigmatic landforms built by past civilizations in deference to spiritual entities or as a means of forming a human connection to the land. Here on the southern border with its fraught history, the landscape is shaped by forces that are less aspirational and more transactional.
Glen Canyon/Lake Powell
Designed as an integral part of the water system that serves over 40-million people living in the Southwest, Lake Powell was created in 1963 with the completion of a major dam structure on the Colorado River submerging Glen Canyon and many dozens of side canyons. Meant as a back-up reservoir to Lake Mead and to provide electric power generation, this enormous man-made lake is also used by over 3 million visitors a year driving powerboats, jet skis, and immense houseboats. People come to the Lake to camp, catch fish, paddle SUPs, kayaks and even a canoe or two. On surrounding land areas have been set aside for roaring around on off-road vehicles.
Predictably there are 2 camps regarding the very existence of the lake; one composed of the folks mentioned above- who clearly live for the time they spend at the lake with family and friends; outdoors, away from jobs, schools, and the day-to-day grind. And then there are the environmentalists who given half a chance would dynamite the dam yesterday believing as they do that the obliteration of the formerly miraculous stretch of the river is obscene and the presence of the dam causes a host of ecological problems downstream.
Enter 20-plus years of drought intensified by a warming earth. Lake Powell is shrinking and the notion that the Colorado River may yet be recovered isn't sounding so far-fetched. As the un-replenished Lake draws down the infamous "bathtub ring" that marks the highest water levels has broadened considerably. Many side canyons are beginning to resume their pre-dam state; that of river ways/drainage to the Colorado. Miles of canyon bottoms are reemerging with piles of silt and debris and new growth of both native and invasive plants. Overall a heartening moment for Colorado River advocates but something of a quandary for many Lake Powell boaters whose access to the water is quickly diminishing.